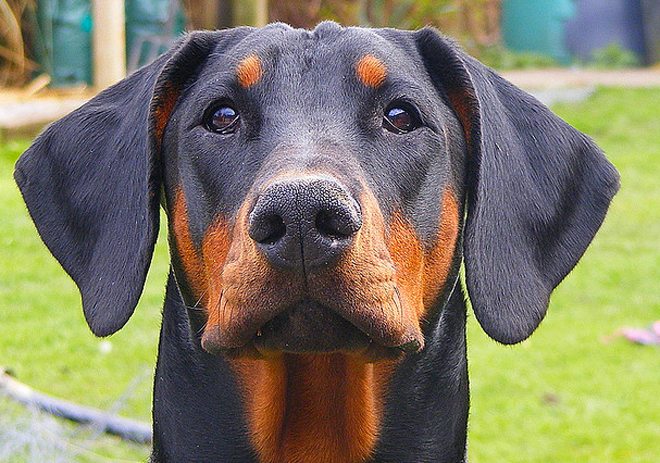 We are going to discover one of the more elegant and classy canine breeds, the Doberman! We will discover their origins, the characteristics of the Doberman, the breed standards and many other fun facts about the beautiful Doberman.

Origins of Doberman are quite recent; in fact they can be traced back to XIX° century. Doberman breed was officially recognized in 1898, 4 years after the death of Mr. Doberman. They say Mr. Karl Friedrich Luis Doberman wanted a dog to keep him company during work. Mr. Doberman worked for the Municipality in Apoda (Germany) as a tax collector. At that time, being a tax collector dangerous job because collection agents were often victim of aggression by criminals. So Mr. Doberman was inspired by dog shows that he attended, he decided to create a dog breed with precise features: courage, speed and absolute dedication to its owner.

The Doberman’s origins are surrounded by the legend of Mr. Karl Friedrich hiding the dog breeds he used for the breed: some thought that he crossed a pinscher, German shepherd, and a Rottweiler. Others however thought that it there was also a Greyhound involved, since the Doberman is the second fastest breed of dogs in the world. The Beauceron, Great Dane and Weimaraner have also been considered.

There is another urban legend that attributes the Doberman’s aggressiveness to a cerebral compression that takes places at around 7, allegedly driving the dog insane. There is of course no veterinary and scientific evidence of this. On the contrary, science disproves this theory, because if this was the case, cerebral damages would be much more physically apparent, showing up as difficulties walking, blindness and death. 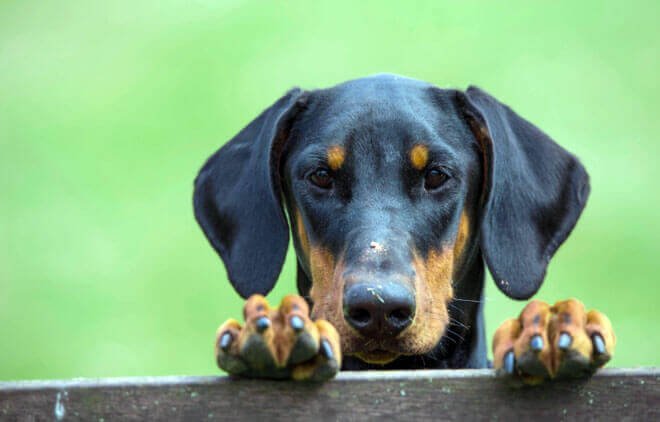 The Doberman is a medium sized dog with a thin and athletic build. Dobermans usually weigh around 40/45 kilos for males and 32/35 kilos for females. Despite being very muscular, it looks very light maintaining a straight back. The Dobermans tail is very thin and of medium length, its head however is small, and it doesn’t present a notable stop and its eyes are very small and expressive. The dog’s ears are hard to the touch and unfortunately in the past there were cut to make them more erect.

We must remember that nowadays cutting Doberman’s ears is illegal in Italy and other European countries. Doberman’s coat is shiny and short, and the most common colors are brown tawny and black tawny Dobermans. Other colors exist that are not recognized like albinos, fawn and blue Dobermans.

Taking care of a Doberman and its diet

Dobermans are dogs that are full of energy, strong and robust. The average life expectancy of a Doberman easily surpasses 12 years without any particular problems. That being said, it is important to remember that like all canine breeds even Dobermans have problems that they tend towards. For example, they are predisposed to dilated cardiomiopathy and prostate diseases. If your dog has labored breathing, a cough, and doesn’t eat, don’t wait to take it to the vet. Some can be affected by hip dysplasia and hypothyroidism. In this case too, if your dog seems much lazier than usual (something quite strange in a Doberman) and you note a strange loss of hair and it gains weight don’t wait and bring it to your vet.

Two other important pathologies that we feel are necessary to talk about are instability in the cervical vertebrae (Wobbler’s syndrome) and Von Willebrand syndrome (a hereditary illness that impedes the proper coagulation of the blood). Don’t be scared, it’s our duty to talk about all possible health problems, but generally Dobermans are healthy dogs with a great will to live! One last word of advice, Dobermans suffer a lot in the cold and humidity so they should be kept in a shelter as much as possible. If they can’t be kept in the house, make sure that it has a very nice kennel.

As far as their diet is concerned, it is fundamental to know that their diet must be high in protein. Up until they are 6 months old, dividing their meals into 3 times a day, but after that twice a day is fine. In the colder months, for the aforementioned reasons, we recommend giving them a bit more to eat and always avoid foods with too much fat. 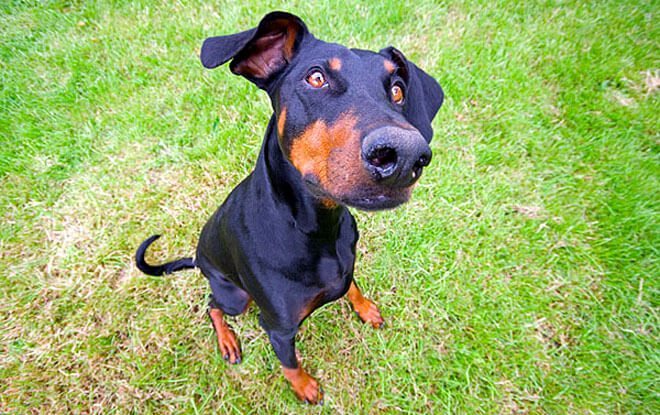 Still today many wonder if Dobermans can be family dogs, considering that not long ago it was listed among the most dangerous breeds of dogs. But it’s the same old story: it can be dangerous in the wrong hands. Dobermans are peaceful and sociable, affectionate and very attached to the family with which it lives. They aren’t one of the best defense dogs by accident. But we recommend them only to people who can dedicate some time to follow Doberman training since its learning skills are astounding. It isn’t an indoor dog nor is it a dog that can just be walked around the block, because it has to find release for its physical prowess and energy.

This does not mean it cannot live in an apartment: it can adapt very well, but it needs attention and constant contact with its owner, who must never forget to spend a lot of time doing outdoor activities with the dog. Those who consider Doberman dogs to be aggressive and mean have probably not had the luck of meeting one since they are in reality quite reliable well-balanced dogs that are very loyal to their owners. Even if many of you won’t believe it, they are very good with children, because they are always sweet and affectionate with them if they get used to their presence from the time they are puppies in an appropriate and conscious way.

When people talk about Doberman breeding, the most important thing to keep in mind is that its behavior as an adult dog is heavily influenced by how it is trained as a puppy. This is only one of the many reasons why Dobermans should be bought exclusively from specialized Doberman breeders. It will in fact be their mother to teach the puppies “good manners”, especially with other dogs.

After that it will be up to the humans to take care of puppy socialization so that it grows into a well-balanced and manageable adult. Remember that it is still a common opinion that Dobermans are aggressive and mentally unstable. The legend referring to its brain growing too much for its cranium and driving the dog insane has not been completely eliminated yet. Many people still believe this absurd story.

If you are smart people that don’t believe this urban legend and you are in love with the beautiful canine breed, we inform you that the price of a Doberman puppy starts at 700€ and easily passes 1000 € depending on the breeders and the dog’s pedigree.

The first famous Doberman was called Graf Belling in Greenland which posed for some artistic pictures after the breed was officially recognized. The most famous are the Dobermans from Magnum P.I. TV series (police drama series from the 80s) Apollo and Zeus, whose owner Higgins called “the boys”.

In the movies, on the other hand, Dobermans have almost been the good guy, due to their sad reputation. Think about the Walt Disney movie: “Oliver & Company” where two Dobermans Rosco and Desoto had negative roles. They are in fact the faithful companions of a dangerous gangster. Even in Up in 2009, there is a Doberman named Alfa who is an authoritative and selfish character who hates another dog, a loveable and silly golden retriever. Luckily at the end of the film, the true character of the Doberman comes out and the two become great friends.