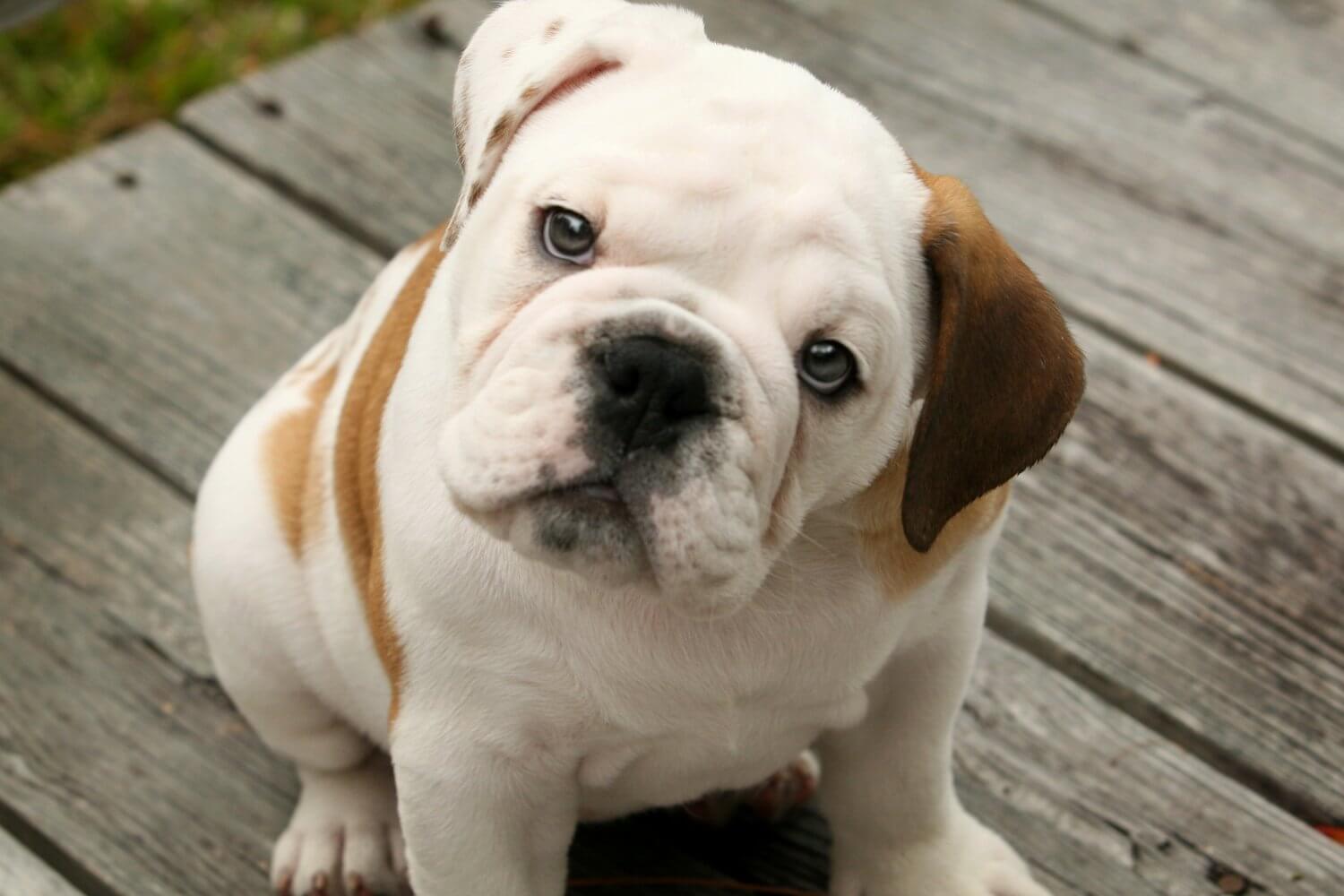 Today we are going to talk about the English Bulldog. He is an ancient fighting dog, who in the past was in fact one of the British dog breeds most used in the atrocious fights between animals. Notwithstanding that, the English Bulldog reveals himself to be a perfect companion dog, gentle and affectionate, and in his eyes there isn’t even a hint of the work he did his previous life. We’ll discover the english bulldog temperament, its origins, and the breed standard of one of the most beloved small breeds of dog in the world.

To understand the history of the English Bulldog, we must first be acquainted with one of his ancestors, the “dreaded” Mastiff, fighting dogs that fearlessly attacked bears, lions, and bulls. Between 1300 and 1400, this connection was noted by Edward Langley, who gave us the first account of the Bulldog breed, and who defined them as “second class Mastiffs.” In the sixteenth century, people finally began to seriously take into consideration this evolution of the Mastiff, then called the “Bold-dog.” Willy Harrison defined them as fearless and bloodthirsty, to the point that, according to him, four Bulldogs would be enough to bring down a bear.

In 1632 we see the first reference to these dogs as “Bulldogs,” thanks to Preston Eaton who brought the first samples to London as fighting dogs, a bloody spectacle that, in the reign of Elizabeth I, brought the English Bulldog to the forefront of the dog world. In the nineteenth century, however, the fighting between animals was fortunately banned, and the English dog bordered on extinction. The Bulldog’s disappearance was avoided thanks only to the dog shows in Birmingham and Sheffield, where the English Bulldogs were so successful that the first English Bulldog club was founded. Thanks to this club, Philo Kuon, the breed standard of the English Bulldog was officially recognized the following year.

The striking popularity that the English bulldog enjoyed in England soon reached the United States, when an English Bulldog became the faithful companion of Winston Churchill (some even noticed a certain similarity between the two, but we aren’t going to be the ones to confirm it!!) By this time, the success of the English Bulldog was in full force. 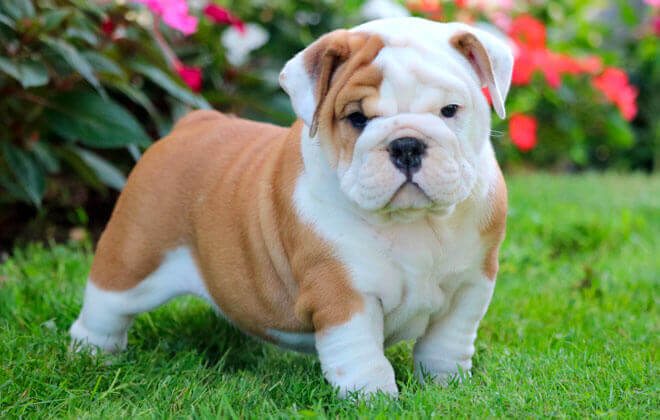 The unmistakable appearance of the English Bulldog is mainly characterized by his proportions. An adult male is rarely over 40 cm tall, and the optimal weight is around 25 kg. These measurements might make us think that the English Bulldog is not very big, but actually, while watching him the first impression you get is that he is a very imposing dog. Females are much less massive than males and have more delicate features. Critical to the breed standard of the English bulldog is the harmony between the various components of the body, which must come together in a fluid line, without stops or sudden interruptions.

The torso of the English Bulldog is quite close to the ground as the legs are short and slightly bowed to the outside, but they are also very strong and athletic, although the English Bulldog isn’t terribly motivated to work out.  The tail is low, and is folded downward. The muscles that cover the entire body are highly developed, particularly on the neck, which supports a significant head. The muzzle is smooshed in, brachycephalic, and slightly turned upwards. His eyes are dark and incredibly intelligent, and so often assume expressions that seem human. The dog’s small “rose” form ears are thin and high set, and are firmly attached to the head even though they fold over.

The permitted coat colors of the English Bulldog are white and various shades of fawn. While white or fawn color streaks are permitted, the snout and the mask must always be black. 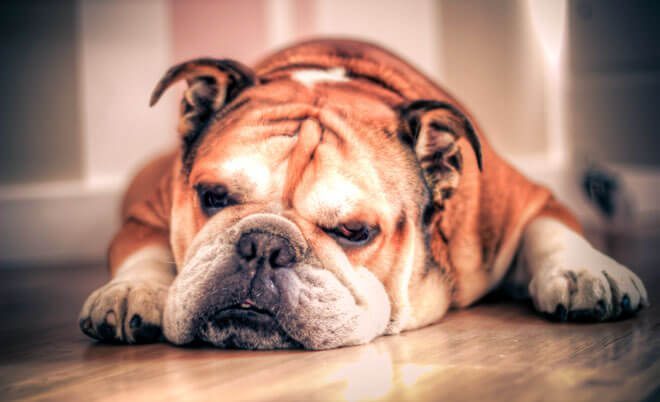 The care given to the English Bulldog dog is almost entirely focused on respiratory problems brought by brachycephaly; the fact that he must be kept away from extreme heat, as well as the care that must be taken to avoid heat exhaustion or excessive fatigue which could lead to cardiac problems. The English Bulldog’s physique must be kept under tight control because being overweight exponentially increases the risk of respiratory problems. Even so, the Bulldog requires daily physical activity, such as a good walk in a shaded avenue, but never a race! Allowing the Bulldog to accompany on his owner on their daily errands would also be perfect!

Despite its origins in bloody combat, the Bulldog is perhaps one of the most peaceful dogs in the world. His patience has no limits, so he is very suitable for being in the company of children and other animals, such as cats. Because he is still a dominant dog, a male English Bulldog might not tolerate well the presence of other males. Very affectionate with his master, and with a quiet disposition, he does not believe that violence is the solution to problems. So unless he believes the safety of his master is threatened, he is never, ever an aggressive dog.

Because he is such a quiet dog, when the English Bulldog barks it is good to listen to him, because he is probably telling us something important. He adapts well to life as an apartment dog, even in a studio, and cannot under any circumstances be outside all day. It is not a dog suitable for people who spend too much time at work, as the English Bulldog suffers when left alone too long and can become fiercely apathetic. His dream? To sit on the couch with his owner watching TV or napping! As already mentioned, let us remember that the English Bulldog absolutely needs physical activity, and is quite capable of doing so, even though he might not be too willing to get up and do it. He enjoys the walks with his beloved master, provided the walks take place in a cool area and or even during the evening hours. 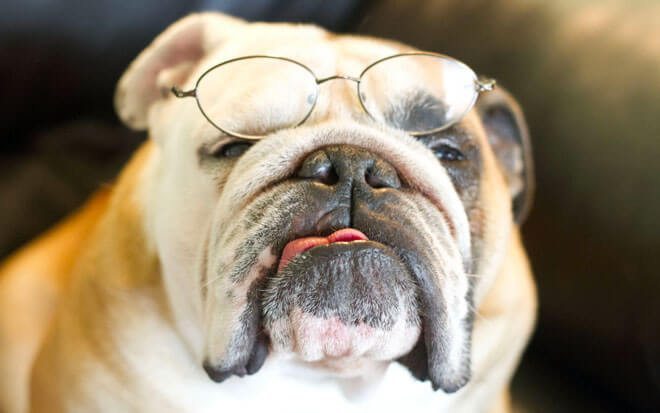 Who can resist a cute English Bulldog puppy? It’s almost impossible … but remember that they are as beautiful as they are sensitive; if you decide to purchase a Bulldog puppy, the most important thing is to contact a reputable English Bulldog breeder. As we have already explained, the English Bulldog needs to be raised with special care and attention so as to avoid developing problems relating to weight and breathing, as well as problems of the heart.

English Bulldogs can be quite expensive. The breeder will be required to inform you about even the smallest details of the physical condition of the puppy, especially with regard to its high susceptibility to genetic diseases. Let us remember that his health comes first, and the sweetness of this small English dog and the attractiveness of his touchy and patient demeanor will surely repay your investment.